Basic to college level courses from the comfort of your own laptop, tablet, or smartphone, by ASSR and Alan Parsons.

LEARN HOW TO MIX WITH CONFIDENCE

Get in the mix 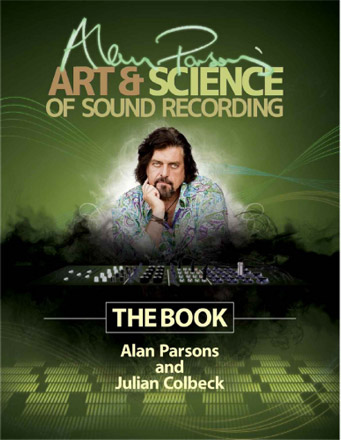 More than simply the book of the award-winning DVD set, Art & Science of Sound Recording, the Book takes legendary engineer, producer, and artist Alan Parsons' approaches to sound recording to the next level. In book form, Parsons has the space to include more technical background information, more detailed diagrams, plus a complete set of course notes on each of the 24 topics, from "The Brief History of Recording" to the now-classic "Dealing with Disasters." Written with the DVD's coproducer, musician, and author Julian Colbeck, ASSR, the Book offers readers a classic "big picture" view of modern recording technology in conjunction with an almost encyclopedic list of specific techniques, processes, and equipment.

Enjoy a FREE preview of each video section from the complete series. Purchase options are given with each preview.

A Brief history of recording

Studio Acoustics looks at the principles and processes of how sound works in an enclosed space.

Microphones are involved in almost all aspects and avenues of recording; even a sampled drum

Unless you are a die-hard, analog purist, or have some phobia against computers, recording is now

Monitoring is hearing, or listening. Recording and playback devices were developed at the same time

A large part of being able to conduct a good recording is knowing how to listen.

This section opens with Alan shouting at the mountains alongside his Santa Barbara home.

There are generations of guitarists whose careers would have been very different had it not for the delay effect.

Probably the most crucial – and complex – part of modern recording.

Few people doubt that the internet represents ‘a’ if not ‘the’ solution as to how we will conduct recordings in the future.

The production descends upon legendary British session drummer Simon Phillips (ex. also of The Who, Toto…) in his Los Angeles studio.

The role of bass in rock, pop, and hip-hop is absolutely crucial. This section looks at bass recording techniques

A common recording conundrum is tackled in this section. How do you record both

Every school, college, and church has a choir that would like to be recorded for posterity.

The Alan Parsons Live Project at The Grove Theatre in Anaheim, California, filmed early in 2009

The mix is where the rubber hits the road for any recording. Conducted primarily at LA’s Record One studios

A 'bad day' in the studio can sometimes turn into a complete crisis.

The definition-defying singer and songstress talks shop with Alan at a tour rehearsal.

A Brief History of Recording

A brief History Of Recording traces recording technology right back to Edison and the wax cylinder. Alan Parsons visits the GRAMMY Museum in Los Angeles, touring the exhibits to map the development of recording during the nineteenth century with such figures as Thomas Edison, Emile Berliner, and Valdemar Poulsen, through to analog tape and early digital media in the twentieth century, to the advent of internet recording.

Studio Acoustics looks at the principles and processes of how sound works in an enclosed space. As acoustician Gavin Haverstick observes, "Sound used to be perfect. Then man invented rooms."

Microphones are involved in almost all aspects and avenues of recording; even a sampled drum loop has had to have been miked and initially recorded by somebody! A microphone is an electrical ‘ear’ that listens to sound and, just as with ears, different mics placed in different positions hear different balances of the sound around them.

Most people’s vision of what a recording studio looks like is a room primarily occupied by a large console full of knobs, faders, and flashing lights. Even software that emulates a ‘recording studio’ seems to perpetuate this image.

Most people’s vision of what a recording studio looks like is a room primarily occupied by a large console full of knobs, faders, and flashing lights. Even software that emulates a ‘recording studio’ seems to perpetuate this image.

Monitoring is hearing, or listening. Recording and playback devices were developed at the same time and the relationship between a microphone and a loudspeaker remains inextricably linked to this day, as anyone who has ever used the speaker in a pair of headphones as an emergency microphone will testify.

MIDI began life as a keyboard-aid but it went on to help establish the digital revolution that has transformed to entire recording landscape. Alan talks to MIDI founder Dave Smith, then looks at the ways MIDI recording is still widely used in film, dance music, and many other genres.

A large part of being able to conduct a good recording is knowing how to listen. This section not only provides fact-based answers as to EQ frequencies and the various ways they can be adjusted, it also gives you tools that you can use to train yourself how to ‘hear’ more analytically.

Universal Audio’s Bill Putnam Jr explains how and why compressors and limiters were first developed, following on from which Alan explains the difference between compression and limiting and when each process s typically used. One very valuable demonstration lets you hear a range of identical recordings–vocal, guitar, piano–with and without compression.

Noise gates were initially created in order to cure the problem that their name suggests, i.e. to gate out (or get rid of) undesirable noise on a recording. The need for noise gates arose from the build up of tape noise that was the result of more and more ‘tracks’ becoming available on various forms of analog tape systems.

Reverb traces the history and progress of ‘artificial’ reverb technology, then takes a parameter-by-parameter look at digital reverb settings, hardware and software reverb products, and application of reverb, both to individual instruments, and to entire mixes.

Along with explanations of delay’s cousins - flanging, phasing, and multi-tap FX – Alan gets his hands dirty on one particularly memorable section involving vocals and delay effects built into the Yamaha 01v96 digital mixer. Who’d have guessed that Alan as yet another career ahead of him in dub?

Alan wrote a brand new ‘Alan Parsons’ track for this DVD set and this section offers a fly-on-the-wall (or reality show – take your pick) seat in the studio. How does Alan turn a drum loop and chord sequence into a song? What’s the value of a ‘live’ tracking session, where musicians actually get to play together? What are the issues? All and more are revealed in this section featuring Simon Phllips on drums, Nathan East on bass, Tim Pierce on guitar, and Rami Jaffee on piano. This is a real gem.

Recording Vocals is definitely the most crucial – and can be the most complex – part of modern recording. This section looks at and talks with singers both experienced and inexperienced and vocal techniques from both singer’s and engineer’s perspectives. Priceless information here from Michael McDonald, Erykah Badu, and a raft of producers, engineers, and vocal coaches. Studio techniques such as vocal comping are looked at in detail.

Few people doubt that the internet represents ‘a’ if not ‘the’ solution as to how we will conduct recordings in the future. Question is, right now, exactly how? We look at one of the currently available systems on a vocal session. It’s 9AM for Alan in California while the singer, working from his own studio Michigan, is ready for lunch. That’s just one of the issues.

Simon Phillips provides one of the most comprehensive looks at the art and science of recording drums ever undertaken. From tuning, to acoustics, to mic usage, to recording approaches, Simon and Alan provide the tools to getting a great drum sound – one of the consistently most elusive aspects of modern recording. Drummer of The Foo Fighters, Taylor Hawkins is also interviewed.

From string pads, to FX and beatmaking, to genuine Hammond B3 or piano playing – the role of keyboard player can be wide and deep. Alan looks at both the playing and ‘programming’ aspects of recording keyboards. How to mic an acoustic piano, how to mic a Leslie speaker cabinet, and also how to manage keyboard parts and sounds so that they work within a track. Foo Fighters / Wallflowers keyboardist Rami Jaffee is the featured player in this section.

Bass may not be the most complex instrument to record but its role in rock, pop, and hip-hop is absolutely crucial. Alan discusses bass recording techniques with Nathan East during a live tracking session for a new Alan Parsons track, All Our Yesterdays and also meets one of his long-time bass heroes, Carol Kaye, who contributed to many groundbreaking records with Phil Spector, Quincy Jones, The Beach Boys and others in the sixties and seventies.

Guitar recording has developed considerably since Alan first helped to record guitar heroes such as George Harrison, Jeff Beck and David Gilmour back in the 1970s. Alan visits top LA session man Tim Pierce at his own studio in L.A’s San Fernando Valley and looks at parts, sounds, effects and approaches in this fascinating look at how guitar and guitar processing has evolved over the past twenty or thirty years.

A common recording conundrum is tackled in this section. How do you record both, simultaneously, without one bleeding into the other? A range of physical and technical solutions are provided.

Every school, college, and church has a choir that would like to be recorded for posterity. Alan visits a California High School and captures a magical performance – not in a studio, or concert venue – but in the challenging setting of a multi-purpose school hall. Learn how a careful set-up and skilled post-production can elicit a wonderful result.

The Alan Parsons Live Project at The Grove Theatre in Anaheim, California, filmed early in 2009, provides a colorful backdrop for this brief but informative section on the challenges posed by live recording in a concert setting.

The mix is where the rubber hits the road for any recording. Conducted primarily at LA’s Record One studios, where Michael Jackson’s last three albums were recorded and mixed, Alan takes us through every stage of a mix from preparation to delivery media in this fascinating and extensive section. Good working practices (consolidation, track sheets, notes and more) are proposed, along with the chance to see so many of the program’s previous technical sections – EQ, reverb, digital audio and computers – come to life. A variety of mixing settings, from working with an analog console to wholly “in the box” are shown and discussed.

A 'bad day' in the studio can sometimes turn into a complete crisis. The final section looks at ways to avoid getting into – as well as climbing back out from – disastrous recording situations.

The definition-defying singer and songstress talks shop with Alan at a tour rehearsal.

Add Multi-Platinum experience to your Audio, Recording and Music Production courses with Alan Parsons on your team! 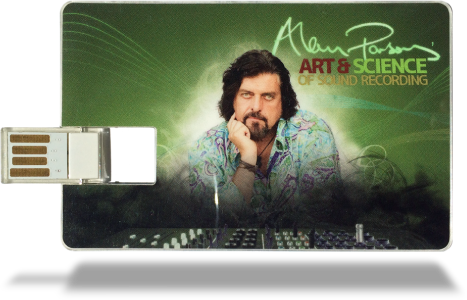 The ASSR Educational License installs the complete Alan Parsons' Art & Science Of Sound Recording video series as a stand-alone app on individual workstations in your lab, making this award-winning body of work available to all your students in a fast and accessible format. The Educational License is the cornerstone of the recently announced Music Production Curriculum—a complete and integrated educational package comprising 24 full-length Lessons Plans based on this video series and Session Files. 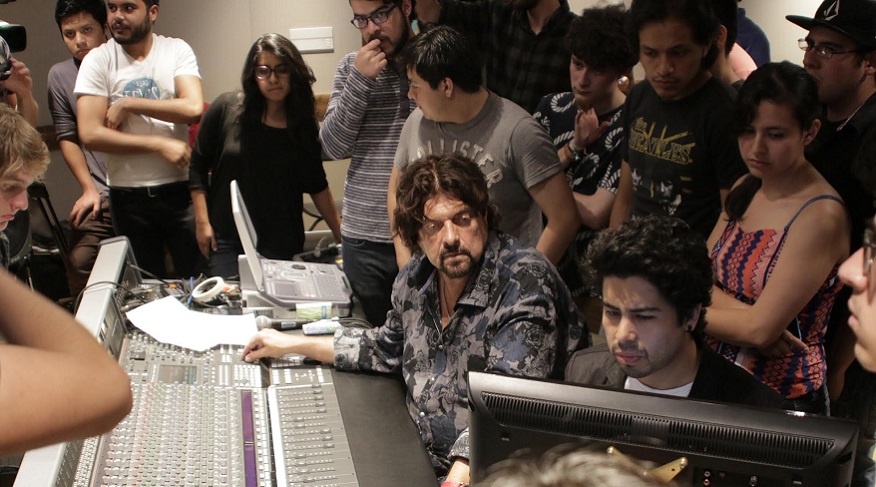 Master Class Training Sessions are held in recording studios around the world and currently comprise one or two day sessions at one of three Levels.